Upon returning home from Akademy: thoughts

Akademy is long over, you say? Yes, but I've been traveling almost constantly since flying home, since my husband is on the home leg of his long hike of the Pacific Crest Trail, which he is chronicling at http://bobofwashington.blogspot.com. While driving about the state to meet him, I've not been online much, therefore unable to create blogposts from my thoughts and impressions written during and right after Akademy. Fortunately, I did scrawl some thoughts which I'll post over the next week or so.

Please visit https://akademy.kde.org/2015 for more information about Akademy. Click the photo for a larger version and add names if someone is left unlabeled.

First: A Coruña where Akademy 2015 met, is beautiful! Galicia, the region of Spain is not only beautiful, but serves delicious food, especially if you love fresh seafood.

The local team, working in conjunction with the e.V. Board and the amazing Kenny Duffus and Kenny Coyle created a wonderful atmosphere in which to absorb, think, and work. One of the best bits this year was the Rialta, where most of us lived during Akademy. Scarlett and I flew in early, to get over our jetlag, and have a day to see the city. 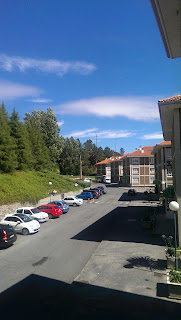 The journey from Seattle began very early Monday morning, and Scarlett set out even earlier the previous day via Amtrack train to Seattle. Our connections and flights were very long, but uneventful. We caught the airport bus and then the city bus 24 and walked to the Rialta, arriving about dinner-time Tuesday. Although we tried to avoid sleeping early, it was impossible.

Waking the next morning at 4am with no-one about, and no coffee available was a bit painful! Breakfast was not served until 8am, and we were *not* late! Rialta breakfasts are adequate; the coffee less so. I found that adding a bit of cocoa made it more drinkable, but some days bought cafe con leche from the bar instead. That small bar was also the source of cervesa (beer) and a few whiskys as well.

One of the beautiful things about the Rialta was their free buses for residents. Some were called Touristic, and followed a long loop throughout the city. You could get off at any of the stops and get back on later after sight-seeing, eating or shopping. So we rode it a loop to figure out what we wanted to see, which was part of the sea-side and the old town. Scarlett and I both took lots of photos of the beautiful bay and some of the port. After visiting Picasso's art college, we headed into the old city. On the way in, we saw a archaelogical dig of a Roman site, I guess one of many. This one was behind the Military Museum. As we walked further into the city, we heard music from Game of Thrones, and a giant round tent covered in medieval scenes. As we walked around the square trying to figure out what was happening, we saw lancers on large horses, dancing about waiting to enter the ring! 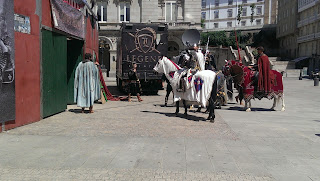 Some of the Akademy attendees were inside the tent watching the jousts, we later found out. I stopped in to the tourist info office to find out why the tent was there, and found out there was a week-long celebration all through the old city. It was delightful to turn the corner and see a herd of geese, or medieval handicrafts, or.... beer! A small cold beer from a beer barrel with a medieval monk serving us was most welcome as we wandered close to Domus. The Rialta bus was a great way "home."

A day of play left us ready to work as the rest of the attendees began to arrive.
Oh by the way: give big! Randa Meetings will soon be happening, and we need your help!

Posted by Valorie at 9:56 PM No comments: Links to this post

Weeeee! KDE is sponsoring Randa Meetings again, this time with touch. And you can help making KDE technologies even better! This exciting story in the Dot this week, https://dot.kde.org/2015/08/16/you-can-help-making-kde-technologies-even-better caught not only my attention, but my pocketbook as well.

Yes, I donated, although I'm not going this time. Why? Because it is important, because I want Plasma Mobile to succeed, because I want my friend Scarlett* to have a great time, and because I want ALL the devels attending to have enough to eat! Just kidding, they can live on Swiss chocolate and cheese. No, really: the funds are needed for KDE software development.

So dig deep, my friends, and help out. https://www.kde.org/fundraisers/kdesprints2015/

*(And somebody hire Scarlett to make KDE software!)
Posted by Valorie at 5:35 PM No comments: Links to this post